The Cutout style emulates paper cutout animation, with two sheets of paper layered on top of each other. Normally, the top layer is “cut-out”, revealing the bottom layer underneath. Nonetheless, this behaviour can be inverted to replicate simple, two layered paper-cut animation—as seen in the second example in the video above, where the purple goes to the background).

The style can be art-directed at each level of control with MNPRX and its custom built cutout material.

Cutout animations are excruciating to create manually using scissors and hundreds of paper sheets, therefore, reproducing this style digitally presents a refreshing take, which can benefit from the flexibility given by 3D animation. No more trees or fingers are harmed during its creation and one can playfully compose and create the animation, taking complete advantage of digital tools and the 3D environment.

There are three fundamental elements within the cutout style which require to be controlled:

The top and bottom layers of paper (canvases) are controlled respectively by the Main canvas and Alternate canvas attribute groups. There are over ten distinct canvas textures to choose from and these can be customized in color, scale, rotation, roughness, shading, and tiles. See the canvas documentation for a description of these attributes.

External lighting affects the cast shadow (drop shadow) and bevel of the cutout, together with the overall shading of the paper sheets (canvases).

Lighting is controlled globally through the canvas light defined by the Canvas Light Tilt and Canvas Light Dir attributes.

Only the two sheets of paper need to be lit within the style. There will not be any shading control within the cutout material assigned to objects in the scene.

To refine and customize the cutout style, a series of global cutout attributes are provided within the style configuration node. 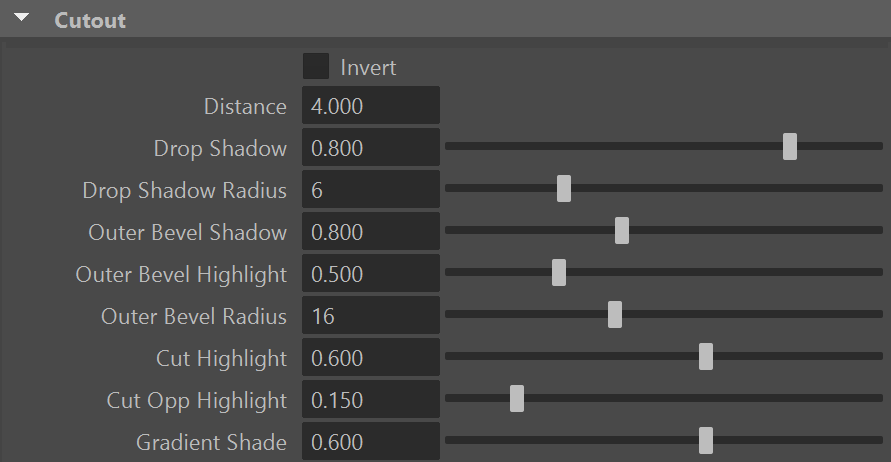 Style attributes in the configuration node.

If checked, the cutout is inverted. This attribute is useful for emulating simple, two-layered paper cut animation, instead.

Distance between the two canvases (papers). A longer distance will increase the offset of the cast shadow.

Varying paper distance between 0 and 6.

Intensity of the cast shadow.

Drop shadow between 0 and 6.

Radius of the drop shadow in pixels, modifying the shadow cast by the top canvas (paper) on the bottom canvas.

Drop shadow radius between 1 and 20.

Intensity of the outer bevel shadow (paper curving away from the light).

Intensity of the outer bevel highlight (paper curving towards the light).

Outer bevel radius between 1 and 25.

Intensity of the cut edge near the bevel shadow (cut edge facing the light). A value of zero means that the cut edge is invisible.

Intensity of the cut paper edge near the bevel highlight (cut edge turning away from the light).

Cut opposite highlight between 0 and 1.0.

Gradient shading between 0 and 1.0. The gradient follows the direction of the Canvas Light attribute. 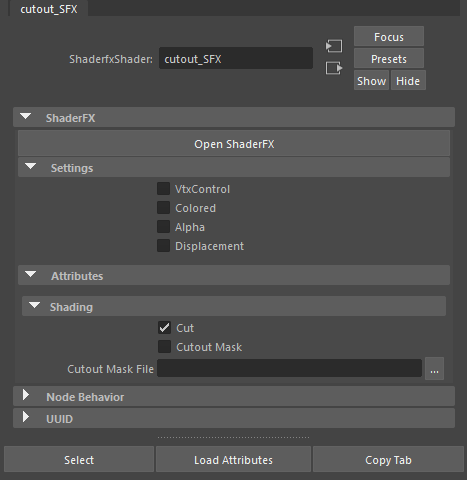 The default cutout material in the Attribute Editor.

The cutout stencil is generated by the cutout material, which needs to be set on all cutout objects. To assign this material on an object, select an object and load the “_cutout” material preset (see material presets).

Closed by default, once opened, each Setting allows you to customize what optional features the cutout material should have. Most of these settings are disabled by default, as to avoid unnecessary computations and clutter for artists. If needed, enabling settings will provide the necessary attributes to configure them.

Enables the control of stylization effects through the vertex colors. This attribute is automatically managed by MNPRX and is activated as soon as you start using PaintFX.

Overrides the color of the canvas with the color specified in the Color Tint attribute, which is generated when this setting is checked.

Allows the use of alpha masks to modify the cutout stencil. The setting creates relevant alpha attributes, documented here.

Useful to add geometric detail, which can enhance the cutout silhouette. Displacement and its attributes are documented here.

If checked, the material will make the object a cutout stencil. Otherwise, the object will not be cutout. This is enabled by default.

Cutout Mask is an black and white uv-map that defines what parts of the object should be cut-out and which parts should not. This attribute toggles the use of the Cutout Mask File.

Specifies the file path to the Cutout Mask. In Cutout Masks, white is cut, whereas black is uncut. The path can be absolute or relative to the project root directory.

The color of the canvas is overridden with the custom color set by this attribute. This attribute is only available if the Colored setting is enabled.